Few foods draw as many different opinions as chili. Maybe pizza might with its toppings and crust and sauce back and forth.

With chili, you can do chicken, turkey, pork, beef or a combination of those.  You can go with ground meats or nice, bite-size, browned morsels. You can skip the meat altogether and just make a chili with various vegetables. Then there’s the question of tomatoes or not? It’s up to you and what you like. Same with beans, as far as I’m concerned.

Really, it all depends upon what you want. Chili, I think, is everything you want it to be.

What I want is a deep, rich, not-too-thick soup, colored and flavored with various chiles, and filled with bite-size chunks of beef. I want some tomatoes in there, too, but I don’t always add beans. Sometimes I use red wine; other times I add beer. I’m a huge fan of cumin and coriander, and I toast and then grind my own.

Today, I looked into my pantry, took stock of my stash of dried peppers and decided to combine what I love most about these two recipes into one–the beer and spices and tomatoes from the NYT recipe and the chile puree from the epicurious recipe. Here’s how that went: 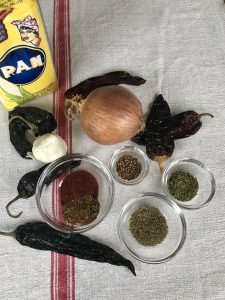 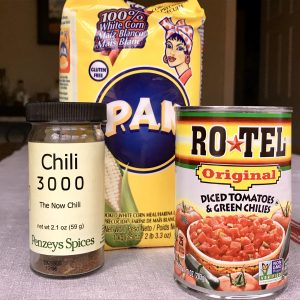 salt and pepper to taste

In the same dry skillet, toast the cumin and coriander seeds until fragrant, about 45 seconds, shaking constantly to keep them from burning. Remove and grind to powder in a mortar and pestle or in a coffee grinder. Set aside.

Cut the chiles in half and remove the stems and seeds. Place them in a large, heat-proof bowl and cover with very hot water. Let sit for 30 minutes.

Peel garlic and place in a food processor or blender. Add the soaked chiles, two teaspoons salt, 1/2 teaspoon black pepper, 1 teaspoon honey and enough of the soaking liquid to form a paste. Puree until smooth, and set aside.

Cut the beef into 1/2-inch cubes and season with salt and pepper. Heat 3 tablespoons vegetable oil in a large, heavy pot over high heat until shimmering and brown the beef (in batches) about 6 to 8 minutes per batch. Transfer to a bowl. 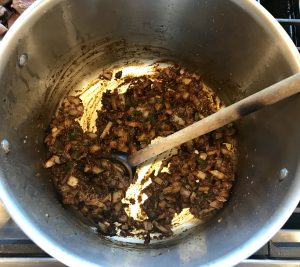 Turn the heat to medium and in the same now-crusty pot, cook the onion and jalapeño peppers, stirring with a little salt and pepper, until soft, about 5 minutes. Add the cumin-coriander powder, chile powder, oregano and cook, stirring constantly, for one minute. Add the chile puree, and stir well for one minute. Dissolve the masa harina in two cups of water and add, stirring. Add meat, tomatoes in their juices, beer, remaining 2 cups water, chocolate and brown sugar, and stir until combined.

Bring to a gentle simmer and cook, still simmering, for about 2 hours, until the meat is tender. Taste and add salt if necessary.

This makes about 8-10 servings. It tastes even better a day or two after it is made. We enjoyed it with the amazing cornbread from Frank Stitt’s Southern Table, and we served it with some sour cream and fresh cilantro and jalapeño slices.

Tip:  Use kitchen shears to deal with your dried peppers. Use a small spoon to scrape out the seeds and membrane in your fresh peppers. 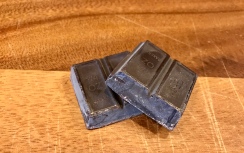 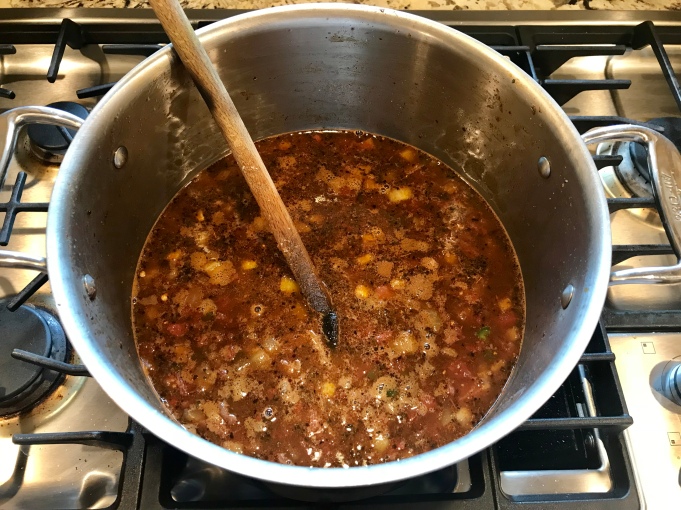 4 thoughts on “Dinner at My House: Chili Your Way”