So far this flu season I’ve braved three buffet dinners, two track meets and one gala, armed with I don’t know how many little bottles of hand sanitizer and the new habit of eating finger foods with my left hand. I also happen to have a not-so-secret weapon:  Medicine Soup.

Think chicken soup … and then think some more.

This recipe for Aromatic Shrimp and Noodle Medicine Soup, by Lily Freedman, originally appeared in bon appetite, but I found it on epicurious.com.

It takes me more than a little while to make this soup partly because when I go to Hometown Supermarket on Greensprings in Homewood to shop for it, I get so easily distracted by all the awesome things there.

Like shelves and shelves of sauces and more savory, sweet, spicy gochujang (Korean red chili paste) than I’ve ever seen in one place. (This is one of my very favorite condiments. Get a small tub of this stuff, and just google all the wonderful ways you can use it.) I found some of those fancy little knotted bamboo hors d’oeuvres picks in the back of the store along with lots of the colorful ceramic spoons you find in Asian restaurants. I usually pick up some Japanese crackers or Chinese candy or some exotic fruit to surprise my family. (Produce here is fresh and fun and nicely affordable). And if I’m hungry right at that moment (I would not recommend shopping while hungry at Hometown Supermarket), I just duck into Mr. Chen’s in-store restaurant. The Pork in Black Bean Sauce is a winner.

Truly, gathering the ingredients for this recipe is a huge reason why I love this dish so much.

The soup is a two-step process. You make the amazing broth, and then you make a paste of cashews, shallots,  chiles, more lemongrass and more ginger, which adds some lovely depth to this soup. But I promise, it’s totally worth the effort.

It might also be worth doubling the recipe and freezing half of the broth and paste (you can add fresh shrimp when you reheat it).

That way, if you’re not feeling well, your medicine soup will be ready when you need it.

4 scallions, thinly sliced on a diagonal

Fresh tender herbs (such as Thai basil, cilantro, and/or mint)

Make the paste: Pulse cashews in a food processor until very finely ground. Add shallot, chile, lemongrass, ginger, brown sugar, and shrimp paste; process until smooth. Heat oil in a small skillet over medium heat, and cook paste, stirring, until it begins to brown, about 2 minutes. Set aside.

Assemble: Cook noodles according to package directions. Drain; rinse immediately under cold water and drain well. Bring broth to a simmer, add shrimp, and cook until cooked through, about 2 minutes. Divide noodles amongst four bowls. Add 2 Tbsp. cashew paste to each bowl and ladle broth over; stir to incorporate paste. Top with shrimp, sprouts, scallions and herbs; season with freshly ground black pepper. Serve with chili oil and lime wedges. 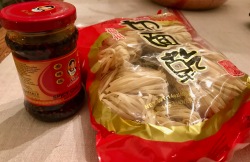 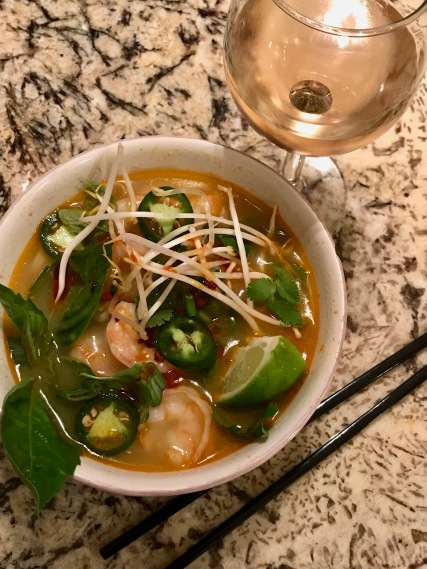