At the Southern Foodways Alliance Winter Symposium held in Birmingham recently, I heard the celebrated female mariachi band La Victoria perform a concert of corridos (storytelling folk songs). They sang about many things including a woman who traveled with her food–and food memories–packed in a suitcase. When she was stopped by a Border Patrol agent, she opened the suitcase and her memories (and the smell of delicious foods from home) opened his heart.

Their song about the historic Big Apple Inn in Jackson, Mississippi, also stayed with me. The song was in Spanish, of course, but the women explained that it was about a man named Juan Mora who sold hot tamales on street corners before opening a little store near downtown Jackson. That was nearly 80 years ago. The Big Apple Inn has been selling tamales as well as “smokes and ears” (smoked sausage sandwiches and pig ear sandwiches) since 1939.

My younger daughter, Eleanor, is attending school at Millsaps College in Jackson, so I decided right then that I would find the Big Apple Inn the next time I was there to visit her.

That happened to be last week.

It wasn’t hard to find. The original location at 509 North Farish Street is only about 10 minutes from the Millsaps campus. There’s another, I think, at 4487 North State Street, but I wanted the one with the history that goes way back.

Farish Street was once the economically independent hub of the African-American community in Jackson–actually the largest such community in the entire state. The bustling Farish Street in this 1947 photo from the University of Mississippi archives was home to Trumpet Records and Ace Records and the Speir Phonograph Company. An early campus of Jackson College, which became Jackson State University, one of our historically black colleges and universities, was located there. The Farish neighborhood was added to the National Register of Historic Places in 1980.

The street is not nearly that busy anymore, but Big Apple Inn comes right up on Waze, and when I got there I saw a Waitr sign on the counter. So there’s that, too.

It’s worth a trip for many reasons.

This story and film about the Big Apple Inn from the Southern Foodways Alliance explains why.

The short version goes like this:  Juan Mora, known as “Big John” to his neighbors and customers came to Jackson from Mexico City. He named his store the Big Apple Inn after his favorite dance, the Big Apple. Today, his great-grandson Geno Lee is the fourth-generation owner of the place. According to the SFA story, Big John was a big supporter of the community that supported him. “As long as he was able to care for his family, anything left over went to everybody else. In fact, all the kids in the neighborhood knew that they could get school supplies or get meals from Big John,” Geno told SFA interviewer Amy C. Evans. 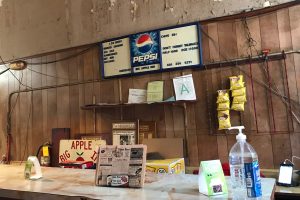 At the Big Apple Inn, I was talking with another customer who asked if I was getting ears. I told her not today, and she said I needed to come back then. Another customer was there for both ears and smokes; he said he likes the ears, and his lady wanted some smokes. I got my half dozen tamales and headed for home. My husband and I enjoyed them that night with some leftover tomatillo salsa, but they really didn’t need any condiment. The meat inside the tender cornmeal casing is finely ground and just spicy enough. These are good tamales.

I’m definitely going back. And I’m taking people with me.

The Big Apple Inn is not a secret. It has been featured on the Travel Channel and Food Network and Anthony Bourdain Parts Unknown. After taking a bite of his first pig ear sandwich, Bourdain said, “It’s everything we love about pig: The texture, the mix of fatty, lean, all that. Oh that’s good!” 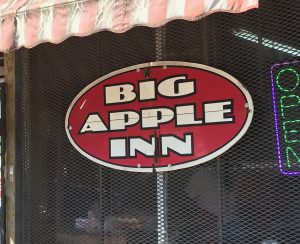 But when I asked a few former Millsaps students and a professor or two about the place, I got nothing. Eleanor and her track teammates and friends had never heard of the Big Apple Inn. They head in a different direction when they want lunch or dinner. To Fondren, the areas’s hip arts district, or just off campus to CS’s or up North State Street to “the Mexican place.”

All that’s just fine, but I think they’re missing something.

That something is about much more than tamales, but we’ll start there.

One thought on “Mississippi Tamales and More, Thanks to a Los Angeles Mariachi Band”