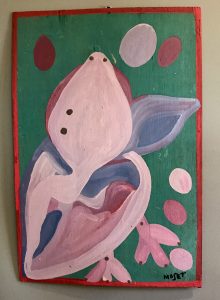 We have a wall full of folk art, which my husband, Rick, and I have collected over the past 30 years. We started our collection with a piece by famed Montgomery artist Mose Tolliver. It’s called Fountain Ducks with Eggs, and it was an engagement gift from our colleagues at The Alabama Journal.

We lived a few blocks from Mose, so I visited with him occasionally. Sometimes I bought something; most times we just talked. One day I wanted to purchase a painting that was hanging above the bed that Mose was lying in at the time. He told me:  “Well, honey, just climb right on up here and get it!”

Since then, wherever we’ve lived, we added to our collection whenever the time (and the piece) felt right.

We have two works by the late, great Howard Finster. We first met Howard in 1986 after he had done the album covers for Talking Heads‘s Little Creatures and REM‘s Reckoning. Rick and I drove up to his Paradise Garden in northwest Georgia with every intention of buying some art. But the reverend wasn’t in the mood to sell. He asked us what we had to trade, saying he had traded one painting to a guy who put a new roof on his house and another to a man who gave him a case of King B Sweet Twist chewing tobacco.

We left empty-handed that day, but several years later we went back with our three-year-old daughter, Allison, who totally charmed Finster. He heard her skipping around in the next room and said, “Hark, I hear an angel. Where are you, angel?” And she replied, “I’m right here!” Then she went and sat with him while we browsed. That day we bought one of Finster’s Trumpet Angels and a House Divided (cautionary art to keep our own home united).

These days our wall features a few more pieces from Mose T. We added a cross by the late Birmingham artist Chris Clark, a fabulous dog from D.C. artist Dan Kessler (some of his pieces were reproduced several years ago for Target; imagine my surprise when I happened upon them). There are a few crows on the wall by Laddy Sartin. Those were gifts from our dear friend Tom Gordon. I added a piece  our younger daughter, Eleanor, painted when she was in elementary school. It’s called Tricked-Out Capybara.

This art wall has been in place in our current home for some 20 years. And sometimes when I looked at it, I would think, “I really don’t like the light switch plate on that wall.” But I never did anything about it. Until now.

One afternoon I grabbed some acrylic paints from the craft closet, took the switch plate off the wall, painted a sunset on it and drew a silhouette of Birmingham’s beloved Vulcan statue.

I didn’t plan on making this a silhouette, but then I messed up the face.) My little art project took all of 45 minutes, including drying time for the acrylics.

When I put the switch plate back up, the wall finally felt right.

My own folk art.

It makes me happy.

This is one of our paintings by Mose T. He was painting with these colors when I visited and this one wasn’t quite dry.

Eleanor’s Tricked-Out Capybara is one of my favorite pieces.

We bought this dog by Dan Kessler at D.C.’s Eastern Market.

Chris Clark’s crosses have always made me happy.